You may have heard that knife crimes committed by adolescents are on the rise in the UK, especially in the area of Greater London; as one example (there are dozens more) have a look at the BBC report Teenager dies after knife attack (of today). Both politicians and police are puzzled how to react. One suggestion by Home Secretary Jacqui Smith was shock tactics, i. e., dangerous knife carriers should be made to visit hospitals with stabbing victims, on the theory that the tragedy that the victims have suffered would open the eyes of the offenders, make them abandon the wayward course of their lifes, and put them on the path to sympathy and understanding. Forget for a moment how a knife stabbing victim might feel when involuntarily presented to a knife carrier, in the confines of a hospital bedroom, without an escape path; does the Home Secretary really believe this would make the knife carrier a born again good citizen? Bring tears to his eyes? Obviously; which shows how disconnected some politicians are from reality.

Luckily, the police does not succumb to such harebrained schemes. No, the police knows how to protect the people from crime and how to apply real shock tactics, i. e., tactics which leave potential criminals shocked, not slightly bored.

Therefore, the UK police has decided that from now on all police officers will be equipped with Bat’leths in order to intimidate juveniles and deter them from carrying knifes. And frankly, what brat armed with a ten inch blade would dare to argue with a police officer carrying a five-foot long, razor-sharp Bat’leth, eh? This will teach them respect. Therefore, the days of knife crime in Britain are over; I mean, just look at Inspector McGarry wielding his Bat’leth: 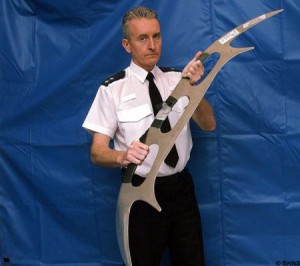 But, sadly, I’m just kidding. No, the police will not be equipped with intimidating weapons, no real or at least slightly promising measures will be taken. Knife crime will continue unchecked. The marvelous picture is rather old (I’ve stumbled upon it just today, thanks to programmer hero Jamie Zawinski, but the photo is from 2006), and shows a slightly befuddled inspector McGarry with a Bat’leth that was handed over to the police during a knife amnesty. I’m not sure if it can be called a knife, but a spokesperson of the police was very glad it is off the streets. Unfortunately, the knife amnesty wasn’t very effective: the victim of today was the 24th teenager to be killed in a stabbing or a shooting in London this year (BBC report from above).

Software-developer living in Cologne, Germany. Was once a physicist, specialized in computer simulations and parallel programming. Now more into JavaScript, web frontend development, and especially mobile computing.
View all posts by Daniel Tiggemann →
This entry was posted in Politics. Bookmark the permalink.