A set of three non-transitive d4 dice (i. e., tetrahedra)

Randomness contains its surprises (take my probably favorite Dilbert cartoon of all times, the accounting department’s random number generator: Are you sure that’s random? That’s the problem with randomness: You can never be sure). One of such surprises is non-transitivity of random variables. Let’s say you have a die A that beats die B on average (i. e., shows a higher number), and die B beats die C on average; it is possible that die C beats die A on average!

What, you don’t believe me? I admit, it sounds counter-intuitive, but it’s true. Such a set of dice is called non-transitive dice. Those are not the normal dice you normally use for gambling (for obvious reasons), they are numbered differently.

The situation is somewhat like the game rock, paper, scissors. Scissors always beat paper, paper always beats rock, rock always beats scissors. With non-transitive dice, the conditions change a bit: die A does not always beat die B, but more often than not, i. e., the probability of A showing a higher number than B is larger than 1/2 (or odds of 1:1).

A set of four non-transitive dice was invented by Bradley Efron (an important and famous statistician). See the image below (I apologize for the low quality, it was a quick sketch): 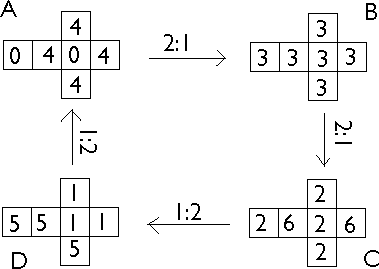 A–C have always the same number on opposing sides; D has as sum of opposing sides always 6 (which is also true for B). The arrow from A to B (with 2:1 on it) means that A beats B with odds of 2 to 1, i. e., with a probability of 2/3 A wins, with 1/3 B wins. And this relation is circular! A beats B beats C beats D beats A with odds of 2:1! If you don’t believe me, count the possible outcomes, they are always 24 wins against 12 losses.

This intransitivity is not just counter-intuitive, it is really surprising that it occurs with such simple random variables (that do not show any pathological behavior). And it has profound consequences in real life, for example when voting in a parliamentary system (Condorcet voting, voting paradoxon; it makes you wonder if voting is such a good idea at all). But I don’t want to dive into an anti-democratic rant, so let’s cast aside the real life, and concentrate on innocent fun.

All examples for non-transitive dice (there’s a second example from Efron, and there are more from other people) that I have found on the Internet are for classical dice, i. e., six-sided cubes. But already Plato knew that dice with different numbers of sides were possible: Platonic solids. These are quite popular with role-playing games. Such dice are called dN, where N is the number of sides the die has. A tetrahedron is a d4, the traditional cube d6, the octahedron d8, the dodecahedron d12, and finally the icosahedron d20 (and I’m recalling fond memories of playing Elite in my childhood – mmh, Coriolis space stations). One often used die, which is not a platonic solid, is the pentagonal trapezohedron, d10.

So, I wondered: Has nobody ever thought about creating a set of non-transitive non-d6 dice? The Internet hasn’t told me otherwise, so I started with the simplest possible die, the d4 tetrahedron, and the lowest number of dice in a set that enables intransitivity, three, and lo and behold! a set of three non-transitive d4 dice: 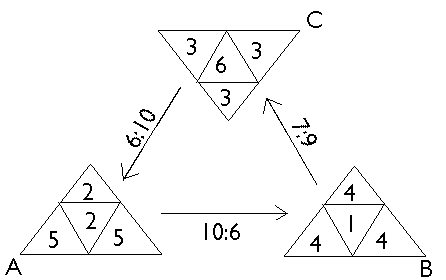 A beats B beats C beats A. Unfortunately, the probablities for winning are not all the same for the three combinations. But that means I have more stuff left over for fiddling around, e. g., four instead of three d4 dice.

And I have a foreboding what the title of the next blog post could be. Perhaps something with d8 in it?

Software-developer living in Cologne, Germany. Was once a physicist, specialized in computer simulations and parallel programming. Now more into JavaScript, web frontend development, and especially mobile computing.
View all posts by Daniel Tiggemann →
This entry was posted in Randomness. Bookmark the permalink.

774 Responses to A set of three non-transitive d4 dice (i. e., tetrahedra)